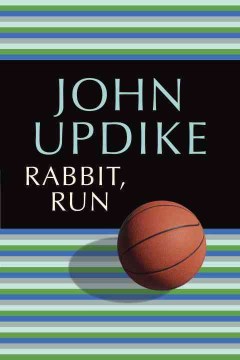 Miserable characters, but amazing prose. Not sure how I missed John Updike all these years.

Right, so Updike is NOT for me, that's clear. I found Rabbit's views and comments on the world depressing and anger-inducing (not rage-inducing because I couldn't raise enough sympathy for the victims of his contempt to get that upset about what he thought of them) and couldn't continue reading those thoughts past page 50. At least I know now and won't continue to wonder whether I'd enjoy the story of 'Rabbit' Angstrom.

This copy of Rabbit, Run fell into the river. Please charge my account for my being unable to return this book. Thank you.

I'm halfway through this AMAZING novel. I'm really enjoying it! Updike is such an astounding writer...I imagine the story swimming around in my head as I read his words on the page....such vivid language and top-notch storytelling. Recommend.

A companion to Revolutionary Road in showing how 60s suburban America was the most luxurious of oppressive prisons for anyone that was slightly above average. I picked this up for $1 at the library book sale because it’s on the Radcliffe 100 Best Novels List.

Marriage before living together is a formula for unhappiness, and when Rabbit runs it’s not so hard to understand why. But when he essentially only runs next door, and stays away but not out of sight, sympathy thins. Rabbit’s wife Janice doesn’t get a voice in the story except for when she is drunk. Rabbit is that much of a dick that he allows his minor-character hooker a voice in his story but not his major-character wife.

Updike pours out gorgeous unpunctuated sentences that lead you on a trail – a trail where you must force yourself to read slowly so you don’t get lost. He can’t keep it up forever though, and the style becomes average right around the same time I start getting tired of Rabbit. A vigorous start, and while I’d like to find out what happens to Rabbit in the next three books, I don’t think I could read about that asshole any more.

One of the great characters of 20th century American literature, Harry Angstrom stumbles through life and relationships, starting here in 1950s suburbia.

A classic of 20th century American literature. Entertaining on a superficial level but also an intriguing look into 1950s middle-America. Updike uses complex metaphors to link sex and religion in a wholly unique way. Highly recommended, thought not for those with prudish tendencies.

Updike won a Pullitzer prize so I had great expectations. I was disappointed - really not a hugely entertaing or intelligent book I thought. The question of who to blame for the tragedy is perhaps the key point. That does make you think.