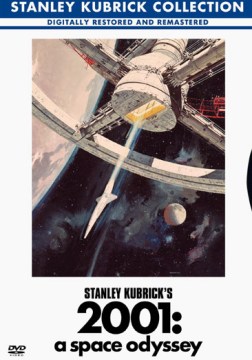 When you have to Google what things mean in the film, it's not good. The soundtrack is great but to me the film isn't as great. I struggle with what the story is about and the imagery. I guess I need a degree/PhD in astronomy. I wanted to like this movie more. The second half of the film got better but not by much to me.

The cinema-photography and early caveman scenes in the first 10 minutes of this show were So Good, absolutely spectacular! and worth watching just for that, then it juts into the future and produces Nothing interesting. If you think this is an epic or visionary movie capturing the cosmic dimension of space travel then you must like people dressed in comically unappealing garb and settings of the early 1960's, classical and 50's ballroom dance music- a bunch of poindexters with less than sublime acting. The space shots were so slow with some kind of weird eerily repetative noises. Someone else in the house watched it and I thought the buzzer on the stove was going off but it was this movie's dumb sound effects. I can't believe this film was made only 5 years ago, more like 55 years ago from the looks of it; The wanna-be kalidiscopic images were like watching psychedyllic grass growing- / I suffered through it for a half hour, that's giving it a chance. What's brilliant about something that's not understandable?I didn't finish it.
Simply put: No plot, No action- Titanically Boring.

the most boring nonsense ever..

This is, to put it simply- the greatest movie ever made. it is a titanic work of sublime art and is timeless. It is one of the only movies that really captures the cosmic dimension so successfully. Kubricks greatest film.

Slow art project run am muck, to slow for many.
Interesting ideas

This was a very brilliant movie even though I didn't understand it at first but really started to catch on and understand much more as I was watching it. Awesome film its a must see.

I saw 2001 when it was originally released and quite obviously in 2019, 2001 is a bit further off.
This digital remasterization is superb, and the original movie is even better than I ever remembered it to be. Unlike many science fiction films, this work looks even better many years later. And what seemed long to many at the time almost flashes by.
The visual realization of the book is stunning. It is a chance to share a magnificent trip into a possible future journey.

Gotta love the classics. The first great "serious" (whatever that means) sci-fi movie, this set the standard for all that followed. Epic? Yes. Detailed? Yes. Realistic? Yes, as far as was known in 1968, and barring the fact that technology developed in a different direction. Mysterious? Mythic? Yes, and yes. Pretentious? Full of questionable theories and obscure meanings? Yes, those too. Yet, despite those latter two, one of the greatest, most visually and aurally stunning movies ever made. The effects are still mind-blowing, and the soundtrack (of Richard Strauss, Johann Strauss, Khachaturian, and Ligeti) is still identified with outer space: "Aliens" re-used that Khachaturian theme, and of course everyone knows the Main Title. It doesn't really matter that the plot is so simple, or that we never built any of that stuff, or that every viewer has to decide what the ending is about. It's still "The Ultimate Trip" indeed.

A visionary and epic movie made by Stanley Kubrick about extraterrestrials and space travel. I don’t want to spoil anything and I won't but allow me to give my opinion on this great movie. The soundtrack in this movie is beyond awesome since it uses monumental classics such as Richards Stausses famous “Also Sprach Zarathustra”. The plot is amazing and shocking with the effects of the movie nicely complimenting the story, whether they are in space or earth. I rate this movie 5/5 for these traits. I recommend this book to anyone interested in sci-fi movies or anyone who is a Kubrick fan. @selfhelpguru of the Hamilton Public Library Teen Review Board

50 relatively brief years have now passed since this monolith of Sci-Fi psychedelia was released.

Space travel and man's technological advances certainly haven't reached anywhere near to what was foreseen back then by author, Arthur C. Clarke. But, all the same, Clarke's wishful thinking combined with Stanley Kubrick's awesome vision of the future certainly produced a startling cinematic experience.

Even though 2001's story-line may be flawed like the pitted surface of the moon (and plot-coherency can also be called into question), 2001 still remains a spectacle of visual brilliance. This film's hard-to-beat special effects set new standards back in 1968.

In these hard-edged, progressively hi-tech decades that have followed 2001, this Sci-Fi milestone still holds up relatively well (that's, of course, if one's willing to give it a fair chance)..... Yep. Good, old Stanley Kubrick - Gone, but not forgotten.

This version has a second disk. Love the extras.
Classic 80a kid syfy fodder. It does take a bit of time to get going. But a beginning to start some great and wondrous ideas.

So disappointing. The visuals and the music is amazing, but everything else is so boring.

The movie is the monolith. Deal with it. It's a pity that the only copy in this catalogue is a first issue dvd way down range in quality from the Blu-ray/dvd available since 2007.

This 1968 SyFy film (with its impressive pre-CGI effects) was a real ground-breaker in its day.

2001 is a great movie that offers an abstract depiction of human evolution, and therefore becomes a very thought provoking film. It also has a lot of early commentary on artificial intelligence, and the possibility of what might happen if machines learn to learn. Although very long and slow paced, the movie set the tone for many sci-fi movies to come. The visuals were incredible for the time, and the story, although confusing and hidden at times, is extremely engaging. Not to mention the fact that the music used became iconic in other space movies, and of course parodied endlessly. 4/5 @ecozones of the Teen Review Board of the Hamilton Public Library

The late 1960s were a period of great optimism. NASA had put men on the moon; the US was clearly winning the space race; computers had arrived even though they were size of houses; it seemed that technology would take astronauts to inner space some time soon. The present would be the future: white bread, Bell, and Howard Johnson would find a place on a space station lavish with red upholstery and picture windows. When Kubrick's film came out in the late 60s, it did so with a lot of buzz. It set the standard for a new genre of motion picture: the credible science fiction picture with credible technology and no vicious aliens bent on the annihilation of the human race. On the big screen, this film was visual tour de force. On my living room screen, not so much. Much of what's in this film is now ho-hum. Special effects aren't so special by today's standards. And what's with that psychedelic light-show stuff in the final scene of the film? Remember, these were the 60's when Kubrick was making his film and a lot of weed was being smoked. This is at least my fourth viewing of 2001; the first two times on the big screen when I was much younger. It was a eye-opener then. But now, on the small screen, not so much.
So, should you see it? Sure, just to say you've seen it. Sort of like "Gone With the Wind" and "Lawrence of Arabia". Just don't expect too much. That way 2001 won't disappoint. Too much. And after you've seen it you may need a pick-me-up like "Close Encounters of the Third Kind" or "Men in Black -- Part I" The special effects are better.

Kubrick blurs the line between technology and theology in this greatest of all sci-fi epics covering a million years of evolution and culminating in man’s “ultimate trip”. The plot may be somewhat facile but the film’s true genius lies in its presentation. The use of light and colour is incredible as is the futuristic hardware and long stretches of meditative silence. A bold visionary departure from a genre of film which at that time was all but monopolized by mutant insects and big-breasted moon maidens. My sentimental favourite.

Hey, mates! I see from the comments here that most of the public does not realize that this story here has nothing to do with space travel! It's about the desire of secret societies to realize immortality, to live forever. It's about disconnecting the aging mechanism of the human genetic programming of aging, to make man ageless, a "god". Nothing to do with colonization of the Moon. All this here is symbolic message. Arthur C. Clarke, Nobel Prize of Lit. winner, who wrote this story here, belonged to a secret esoteric sect, who communicate with symbols. One of them said in a book that their "magic wand" is symbolism. Thus they communicate in front of the noses of the dummy public, who "don't notice nothing," and they laugh at the public simpletons' minds, which takes all literally. The shape of the spacecraft in this film has the shape of a penis in erection, and the smart astronaut is ejected from it like sperm. Isn't that enough allusion for you to see the message? The black monolith in the movie represents the solid, unapproachable, inscrutable secret order, to which Clarke belonged. To me the movie is boring and the symbolism is pushed too far, thus making it uninteresting and not understandable to the dummy public. By the way, the whole Harry Potter story is the same: it's double talk all through, and the crowd is not aware of it, and thinks it's just a children's fiction story. It is not. It describes symbolically the history of the Roman Church (DumbLeader) and the Templar Order (ValDeMort - death valley in French). "Magical Skills" there mean: ways to dupe the crowd with various tricky means. In the last episode of the H.P. story Harry says: "The last enemy to conquer is death." This is the same as what the movie here is about. I noticed that as soon as a comment is made by someone that would enlighten somewhat the duped public, another comment appears, destined to divert attention from the essence of the matter. This is one example of the magic that secret societies practice - keep the dummy public in the dark, away from any mental view into "magical" odysseys into ignorance. Otherwise, the public is actually not interested in thinking at all.

Although some of the technological advances depicted seem quaint in 2018. There are others such as colonization of the moon and trips to Jupiter which we've come nowhere near. The special effects for the most part still work and the story is as compelling as ever. It was audacious, groundbreaking, and influential in 1968, and remains so today.

Explores the limits of human ingenuity & manages to combine man vs machine with the painstaking solitude of space travel; there's also a monolith & starchild allowing any number of interpretations of anthropology & alien life.

2001 was a "Wow!" when it opened in tumultuous 1968, and is still so 50 years later. Films get better and better every year, but this will never be surpassed--it is a genre of its own.

One of the great cinematic masterpieces of all time ~ 420

Overrated. But still pretty good. Music is good, effects are great for it's time.