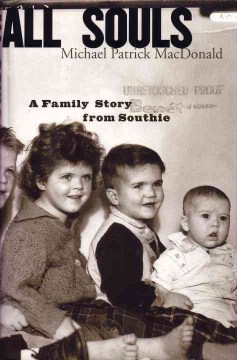 A Family Story From Southie

Random House, Inc.
The anti-busing riots of 1974 forever changed Southie, Boston's working class Irish community, branding it as a violent, racist enclave. Michael Patrick MacDonald grew up in Southie's Old Colony housing project. He describes the way this world within a world felt to the troubled yet keenly gifted observer he was even as a child: "[as if] we were protected, as if the whole neighborhood was watching our backs for threats, watching for all the enemies we could never really define."

But the threats-poverty, drugs, a shadowy gangster world-were real. MacDonald lost four of his siblings to violence and poverty. All Souls is heart-breaking testimony to lives lost too early, and the story of how a place so filled with pain could still be "the best place in the world."

We meet Ma, Michael's mini-skirted, accordian-playing, usually single mother who cares for her children—there are eventually eleven—through a combination of high spirits and inspired "getting over." And there are Michael's older siblings—Davey, sweet artist-dreamer; Kevin, child genius of scam; and Frankie, Golden Gloves boxer and neighborhood hero—whose lives are high-wire acts played out in a world of poverty and pride.

But too soon Southie becomes a place controlled by resident gangster Whitey Bulger, later revealed to be an FBI informant even as he ran the drug culture that Southie supposedly never had. It was a world primed for the escalation of class violence-and then, with deadly and sickening inevitability, of racial violence that swirled around forced busing. MacDonald, eight years old when the riots hit, gives an explosive account of the asphalt warfare. He tells of feeling "part of it all, part of something bigger than I'd ever imagined, part of something that was on the national news every night."

Within a few years-a sequence laid out in All Souls with mesmerizing urgency-the neighborhood's collapse is echoed by the MacDonald family's tragedies. All but destroyed by grief and by the Southie code that
doesn't allow him to feel it, MacDonald gets out. His work as a peace activist, first in the all-Black neighborhoods of nearby Roxbury, then back to the Southie he can't help but love, is the powerfully redemptive close to a story that will leave readers utterly shaken and changed.

Houghton
This searing coming-of-age memoir is set in "Southie" where gangster Whitey Bulger runs the drug business, and class and racial violence erupt in response to forced busing in the 1970s. MacDonald loses four siblings to drugs, poverty, and violence, and eventually attempts to transcend his grief as he becomes an activist in the Southie he can't help but love.

"If you were charmed by Frank McCourt's Angela's Ashes . . . try All Souls, Michael Patrick Mac-Donald's guileless and powerful memoir of precarious life and early death in Boston's Irish ghetto. . . . With its probes of crooked politicians, bad cops, and layers of racism, All Souls easily breaks its regional and ethnic boundaries." -R. Z. Sheppard, Time

Baker & Taylor
The author recounts growing up in a poor Irish neighborhood, and remembers the four brothers he lost to violence

What I appreciate about All Souls is that it doesn't aspire to be an authoritative, exhaustive study of Southie, but rather a very personal and focused description of how it FELT to grow up in that environment. The book isn't loaded down with statistics or many viewpoints-- just MacDonald's recollection of the things his family experienced. His talent as a writer becomes most apparent in the last 50 pages with a story that is so profoundly upsetting that I couldn't put the book down or stop crying. Definitely worth a read.

An incredible, poignant story of the devastation that a family from the white slums of Boston experienced.
*** It's a rare insider's look and perspective. The author talks about how his neighborhood experienced the social-experiment phenomenon of busing - it was not a positive one.
*** He talks about how the mob exploited and manipulated people's perceptions of what was happening to them. Truly evil.