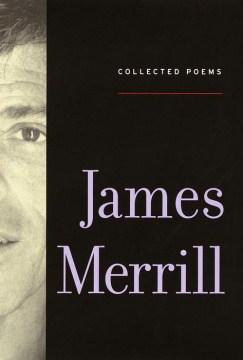 Random House, Inc.
The publication of James Merrill's Collected Poems is a landmark in the history of modern American literature. HisFirst Poems—its sophistication and virtuosity were recognized at once—appeared half a century ago. Over the next five decades, Merrill's range broadened and his voice took on its characteristic richness. In book after book, his urbanity and wit, his intriguing images and paradoxes, shone with a rare brilliance. As he once told an interviewer, he "looked for English in its billiard-table sense—words that have been set spinning against their own gravity." But beneath their surface glamour, his poems were driven by an audacious imagination that continually sought to deepen and refine our perspectives on experience. Among other roles, he was one of the supreme love poets of the twentieth century. In delicate lyric or complex narrative, this book abounds with what he once called his "chronicles of love and loss." Like Wallace Stevens and W. H. Auden before him, Merrill sought to quicken the pulse of a poem in surprising and compelling ways—ways, indeed, that changed how we came to see our own lives. Years ago, the critic Helen Vendler spoke for others when she wrote of Merrill, "The time eventually comes, in a good poet's career, when readers actively wait for his books: to know that someone out there is writing down your century, your generation, your language, your life . . . He has become one of our indispensable poets."

This book brings together a remarkable body of work in an authoritative edition. From Merrill's privately printed book,The Black Swan, published in 1946, to his posthumous collection, A Scattering of Salts, which appeared in 1995, all of the poems he published are included, except for juvenalia and his epic,The Changing Light at Sandover. In addition, twenty-one of his translations (from Apollinaire, Montale, and Cavafy, among others) and forty-four of his previously uncollected poems (including those written in the last year of his life) are gathered here for the first time.

Collected Poems in the first volume in a series that will present all of James Merrill's work—his novels and plays, and his collected prose. Together, these volumes will testify to a monumental career that distinguished American literature in the late twentieth century and will continue to inspire readers and writers for years to come.

Baker
& Taylor
Fifty years of the author's acclaimed poetry--with works ranging from his earliest anthology, The Black Swan and Other Poems, to the posthumous volume A Scattering of Salts--are collected into a single volume for the first time, celebrating a lifetime of verse by one of the twentieth century's literary masters. 10,000 first printing.