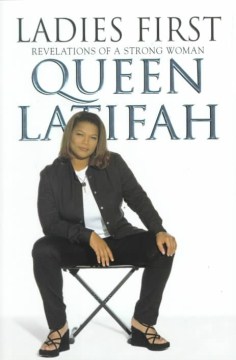 Revelations of A Strong Woman

Baker & Taylor
The rap artist and TV actress draws on her own personal challenges to instruct women in developing their self-esteem, courage, and independence

HARPERCOLL
Queen Latifah is a sensation.

At nineteen, she was the first female solo rapper to have a major record deal. Four years later she had become a top television actress and movie star. She earned a Grammy, started a record label, and became the president of her own company. Today she is rap music's most enduring female force.

But how did Dana Owens, a young girl from Newark, New Jersey, become Queen Latifah and make it to the top of the charts? The most powerful voice in rap has always been quiet about her life.

At once autobiographical and inspirational, Ladies First is the story of a young woman, making tough decisions and terrible mistakes -- about sex and drugs and about who was real and who wasn't -- before she was old enough to drive. It is about the reign of depression that descended on her after her brother's tragic death and how she found a sustaining love in God when it seemed the world was trying to break her. Ladies First is about being confident and sensual in a big, strong body and about blocking out the junk to let in the good. It is about how anyone -- whether from the poorest means or the richest -- can hold her head high in a world full of attitude.

In a queen's universe, each experience is a lesson. Keeping it real and making no excuses, Queen Latifah shares her truth about what's important in life. Full of wisdom and revelations, Ladies First will instill in you the same self-esteem, respect, and courage that brought Queen Latifah peace and her independent edge. Allow her to guide you to discover who you are -- inside and out-as you discover who she is.

Ladies First is one woman's journey to find the riches that were in her life all along, and it is a message of majesty for everyone.With Ladies First, the queen who lives within all of us will rise.

Baker
& Taylor
The Grammy Award-winning rap singer and TV actress draws on her own personal challenges to instruct women in developing their self-esteem, courage, and independence, in an inspirational book featuring eight pages of full-color photographs. 100,000 first printing. Tour.