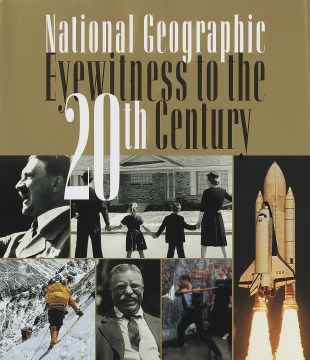 Random House, Inc.
Using photographs, maps, charts, and time lines, this comprehensive volume portrays this century’s incredible events and developments from the Wright Brothers’ first flight to Neil Armstrong’s walk on the moon, up to the events of today. Organized conveniently by decade, each section begins by highlighting a prevailing issue of the day—America and Big Business, Women’s Suffrage, the 1924 Immigrations Restriction Act, the Great Depression, the Atomic Age, McCarthyism, Civil Rights, the Explosion of Mass Culture, the Rise of Conservatism, and the End of the Cold War. The 20th century brought forth the most dramatic advances ever made in a single century. No one tells it better than National Geographic Society.

Baker & Taylor
Some six hundred striking photographs, complemented by essays by distinguished historians, scientists, and explorers, capture the extraordinary events of the twentieth century, including the Wright Brothers, the moon landing, the Depression, the Civil Rights Movement, and the end of the Cold War. 25,000 first printing.

Book News
Chronicles the events of the last 100 years in a thoughtfully prepared combination of extended interpretive essays, short descriptions (a few paragraphs) of important political, cultural, and economic events--mostly pertaining to the US, but some international items; lists of trends and trivia; discussion of achievements in the sciences; and, of course, some 600 photographs--small, well-chosen ones on every page. Each chapter covers a decade, and each year occupies a two-page spread. Attractively designed and produced, this compendium probably ranks among the best of the "sum-up-the-century" genre. Annotation c. by Book News, Inc., Portland, Or.

Simon and Schuster
At the threshold of a new millennium, we look back on an extraordinary century, the most momentous and eventful in the history of humankind. In a hundred years that encompass both astonishing achievements and unparalleled horrors, the world has seen the greatest scientific triumphs ever imagined and the two most destructive wars ever fought. At the dawn of the 20th century, powered flight was a visionary dream. A mere seven decades later, American astronauts stood on the moon and gazed back at Earth. As old empires, fell, new superpowers arose to take their place. As new discoveries vastly increased our store of knowledge, new technologies shrank the globe and accelerated the pace of life. And as era succeeded era. National Geographic was there to chronicle our ever changing world. Highlighted by 600 dramatic photographs and illustrations, this lavish and fascinating volume captures all the amazing variety of the 20th-century experience. Decade by decade, it presents the main themes and monumental events that transformed whole civilizations as well as the colorful details that shaped our daily lives. Here are authoritative essays on historical and cultural trends that reflect the moods and concerns of each decade, from America's arrival on the world stage at the start of the century to the increasing globalization that marks its end. Here too are year-by-year sidebars on important developments and personages, a yearly time line of modern milestones, and features on the subjects of special interest to generations of National Geographic readers. Along with these serious and informative sections, there's a treasury of delightful trivia and lighthearted lists of the people, the songs, the movies, and the accomplishments that gave each decade its unique flavor, from the first Teddy bear to the last episode of Seinfeld, from Kitty Hawk to Cape Kennedy, from Marconi to Microsoft and beyond. This wonderful, wide-ranging portrait is colorful, comprehensive, compelling, entertaining, and utterly engrossing -- in short, a perfect mirror of the varied, vivid, vital century that it celebrates.