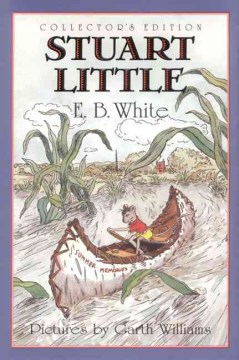 The adventures of the debonair mouse Stuart Little as he sets out in the world to seek out his dearest friend, a little bird that stayed for a few days in his family's garden.
Publisher: New York : HarperCollins Publishers, c1999
Edition: Collector's ed., 1st ed
ISBN: 9780060282974
0060282975

Stuart Little by E.B White is about a mouse named Stuart Little on the quest to find his lost friend Margalo who was warned that one of Snowball the cat’s friends is going to eat her. I enjoyed reading this book, the book is very enjoyable for anyone, no matter their age. The wording was simple and easy to understand. Overall it is a good book others should read.

The writing of E. B. White is a delightful thing. Bits of child-story are mixed with elegant and graceful prose. Throughout the book the words are crisp, efficient, and strung together into the most sublime and dear sentences. Many of the elements of the story are typical of White; strange bits of fantasy that are accepted by everyday folk with only the most cursory of questions. Everywhere in the book are small phrases that mean big things. A very enjoyable read.

It was a bit dated and ended suddenly, but it wasn't bad.

A must-read classic. Although it is slightly dated given the setting, the appeal remains.

I love the concept of a mouse living with humans, I really like how a mouse actually could be helpful living with us, like how he rescued his mothers wedding ring.

Story seems all over the place and the ending really made no sense. I read this to my children for bedtime and they had so many unanswered questions. What about his family that he left? What happened to his bird friend that ran away?

Love this book. This is one of my favorite movies of all time

This is one of those books that I never read as a child. As a parent, I thought I'd gear up to read it to my kids... and became unsure as to WHY exactly it's a classic. I find the situation kind of weird, and not that compelling. It's a mix of chapter "short stories" that don't necessarily add up to much. Sorry Stuart Little lovers, I was underwhelmed. And I love a good children's story.

Similarly to the commenter before me this was among the first books I ever remember reading around 1954 in a grammar school library. Loved it then and love it now.

This is probably the first book I read (as a kid) that had an such an ambiguous ending. It was mindblowing at the time. After rereading it as an adult, I picked up sly messages I missed previous (Stuart teaches prejudices against mice are bad, but justified against rats, for instance).

For kids and adults.

" I rather expect that from now on I shall be traveling north until the end of my days."
"Worse things could happen to a person"

Smokey: My mother was the reason you shouldn't go out into Central Park at night.

Snowbell: Didn't your mother warn you that you shouldn't go out into Central Park at night?

Would anyone like to venture a guess as to why I’ve been such a terrible blog poster lately? I’m hoping the fatigue that has kept me from reading and blogging will subside in a few weeks….

“(Not every doctor can look into a mouse's ear without laughing)”

“Stuart rose from the ditch, climbed into his car, and started up the road that led toward the north...As he peeked ahead into the great land that stretched before him, the way seemed long. But the sky was bright, and he somehow felt he was headed in the right direction.”

“Very fine law,” said Stuart. “When I am Chairman, anybody who is mean to anybody else is going to catch it.”

“He wiped his face with his handkerchief, for he was quite warm from the exertion of being Chairman of the World. It had taken more running and leaping and sliding than he had imagined.”

“Well,” said Stuart, “a misspelled word is an abomination in the sight of everyone.”

I have this book and its very nice .

The story is episodic. First we learn of Stuart's birth to a family in New York City and how the family adapts, socially and structurally, to having such a small son. He has an adventure in which he gets caught in a window-blind while exercising, and Snowbell, the family cat, places Stuart's hat and cane outside a mouse hole, panicking the family. He is accidentally released by his brother George. Then two chapters describe Stuart's participation in a boat race in Central Park. A bird named Margalo is adopted by the Little family, and Stuart protects her from their malevolent cat. The bird repays his kindness by saving Stuart when he is trapped in a garbage can and shipped out for disposal at sea.
Margalo flees when she is warned that one of Snowbell's friends intends to eat her, and Stuart strikes out to find her and bring her home. A friendly dentist, who is also the owner of the boat Stuart had raced in Central Park, gives him use of a gasoline-powered model car, and Stuart departs to see the country. He works for a while as a substitute teacher and comes to the town of Ames Crossing, where he meets a girl named Harriet Ames who is no taller than he is. They go on one date, and then Stuart leaves town. As the book ends, he has not yet found Margalo, but feels confident he will do so