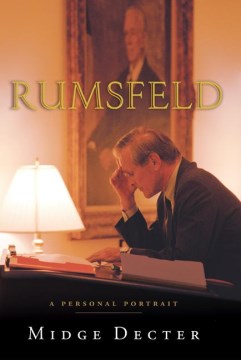 Baker & Taylor
A portrait of the Secretary of Defense chronicles his achievements at the Pentagon, in the War on Terrorism, and during the military campaign against Iraq, noting his relationships with George W. Bush, the media, and the military.

The ultimate, behind–the–scenes look at the Secretary of Defense, Donald Rumsfeld, as he prosecutes the sprawling war on terror and emerges as a figure second only to the President in his ability to capture the country's attention and confidence.

Defense Secretary Donald Rumsfeld has become the leading spokesman for the Bush administration on all matters related to the military and its prosecution of the war on terror. Midge Decter, an accomplished political jounalist who has enjoyed over two decades of personal friendship with Rumsfeld, will answer the question of why and how he has come to play such a critical role at this obviously critical moment. Partly biographical and partly analytical, the book will focus on Rumsfeld's past and current activities as well as what he represents: an ethos of sturdiness, frankness, and resilience that has clearly resonated with the American public in a post–Clinton wartime era. Decter has gained Rumsfeld's full cooperation, and she will trail him through the Pentagon and beyond as he prosecutes the war on terror, including any impending military campaign against Iraq. The daily stresses of advising the president, handling the media, crafting military policy, and dealing with issues of life and death will be examined from the inside––as it is happening.

This book will offer a dynamic, intimate, behind–the–scenes look at the biggest political star (apart from the president himself) of the Bush administration.

Blackwell North Amer
The sudden rise of Donald Rumsfeld to political stardom has been one of the most unexpected developments of the last few years. When he was appointed secretary of defense, no one foresaw that he would become the most prominent and influential member of President George W. Bush's cabinet. But as the main architect of the wars in Afghanistan and Iraq, Rumsfeld moved into a central position as a policymaker. And through his televised briefings, he also moved into the spotlight, where he won the almost worshipful admiration of millions of Americans by the extraordinary directness, agility, and confident poise he showed in handling the press.
Drawing on her long acquaintance with Rumsfeld, a wealth of documents, and interviews with him and his family, friends, and colleagues, Midge Decter provides riveting accounts of the many milestones marking the journey Rumsfeld made from the suburbs of Chicago to the Pentagon. There is the insurgent young congressman; the head of the Office of Economic Opportunity; the ambassador to NATO; the White House chief of staff; the youngest ever secretary of defense; the successful corporate executive; and, finally, the spectacular corporate executive; and, finally, the spectacular second tour of duty as secretary of defense under Bush.
As this remarkable story unfolds, Decter brings her knowledge of American culture to bear on the question of why so many Americans have responded so fervently to Rumsfeld. In answering, he points to the values of the Midwest in which he was born and bred and the powerful appeal they still exert in spite of how old-fashioned they seem in certain circles.
Decter's fascinating account of the life and career of Donald Rumsfeld, lavishly illustrated with photographs from the private collection of the Rumsfeld family, is, then, essential reading for anyone who wishes to become better acquainted with a key figure in public life - a figure whose rise to stardom sheds new light on the current condition of the American people.

Baker
& Taylor
A behind-the-scenes portrait of the Secretary of Defense chronicles his achievements at the Pentagon, in the War on Terror, and during the military campaign against Iraq, noting his relationships with George W. Bush, the media, and the military. 100,000 first printing.