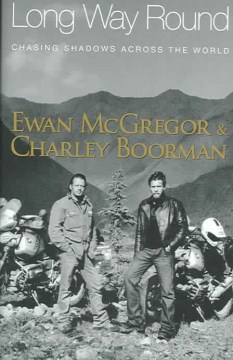 Chasing Shadows Across the World

Baker & Taylor
The popular actors recount their three-month, 20,000-mile motorbike journey from London to New York through three continents and some of the harshest terrain on Earth.

Baker
& Taylor
The popular film stars best known for their respective appearances in the latest Star Wars trilogy recount their three-month, 20,000-mile motorbike journey through some of the harshest terrains on earth, in a personal account that describes how they flew MiG jets in Russia, built igloos in Alaska, trained under Kung Fu masters in China, and more. 100,000 first printing.

Simon and Schuster
It started as a daydream. Poring over a map of the world at home one quiet Saturday afternoon, Ewan McGregor - actor and self-confessed bike nut - noticed that it was possible to ride all the way round the world, with just one short hop across the Bering Strait from Russia to Alaska. It was a revelation he couldn't get out of his head. So he picked up the phone and called Charley Boorman, his best friend, fellow actor and bike enthusiast. 'Charley,' he said. 'I think you ought to come over for dinner...'

From London to New York, Ewan and Charley chased their shadows through Europe, the Ukraine, Kazakhstan, Mongolia and Russia, across the Pacific to Alaska, then down through Canada and America. But as the miles slipped beneath the tyres of their big BMWs, their troubles started. Exhaustion, injury and accidents tested their strength. Treacherous roads, unpredictable weather and turbulent politics challenged their stamina. They were chased by paparazzi in Kazakhstan, courted by men with very large guns in the Ukraine, hassled by the police, and given bulls' testicles for supper by Mongolian nomads.

And yet despite all these obstacles they managed to ride over 20,000 miles in four months, changing their lives forever in the process. As they travelled they documented their trip, taking photographs, and writing diaries by the campfire. Long Way Round is the result of their adventures - a fascinating, frank and highly entertaining travel book about two friends riding round the world together and, against all the odds, realising their dream.

While it took me a while to get through, I thoroughly enjoyed it. Tells of a round-the-world motorcycle trip taken by actors Ewan McGregor and Charley Boorman from London to New York. It gets deep as they go across Europe to Prague, and then into Slovenia and Ukraine before tackling Kazakhstan, Russia, Mongolia and Siberia before going from Alaska down through Canada and the US to New York.
There's also a TV series they did about this which helped pay for the trip. The TV stuff is good (at least what I've seen so far), but the book is better, going into more detail. I think that motorcycle buffs and travel enthusiasts will get the most out of this book.

If you're a fan of the show, this is a great companion piece. It goes deeper into Charley and Ewan's travels and has loads of pictures they took along the way.

The best part about this book is the friendship between Ewan and his best friend Charley. It's their friendship that keeps them going, esp when the trip becomes stressful and difficult in Mongolia and Russia.
Ewan is also a very poignant and emotional writer, which I found surprisingly given that he's portrayed some macho men on film.

Recommend the book over the DVD.

Coarse Language: There is language scattered throughout, including f-bombs.