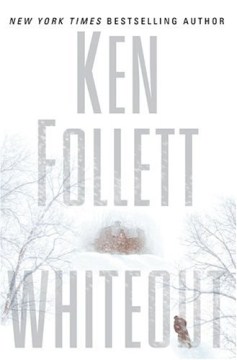 Baker & Taylor
A missing canister containing a deadly virus forms the center of a deadly storm that traps Stanley Oxenford, director of a medical research firm; his greedy grown children; Toni Gallo, the firm's security director; an ambitious local TV reporter; and a violent trio of thugs in a remote house during a Christmas Eve blizzard. 500,000 first printing.

Blackwell North Amer
As a blizzard whips out of the north on Christmas Eve, several people converge on a remote family house. Stanley Oxenford, director of a pharmaceutical research company, has everything riding on a drug he is developing to fight a lethal virus. Several others are interested in his success too: his children, at home for Christmas with their offspring, have their eyes on the money he will make; Toni Gallo, head of his security team and recently forced to resign from the police, is betting her career on keeping it safe; an ambitious local television reporter sniffs a story, even if he has to bend the facts to tell it; and a violent trio of thugs is on their way to steal it, with a client already waiting.
As the storm worsens and the group is laid under siege by the elements, the emotional sparks crackle and dark secrets are revealed that threaten to drive Stanley and his family apart for ever.

Baker
& Taylor
A missing canister containing a deadly virus forms the center of a storm that traps Stanley Oxenford, director of a medical research firm, and a violent trio of thugs in a remote house during a Christmas Eve blizzard.

I cannot understand the good reviews on this book. The details are sparse, and the ridiculous is plentiful. Not a very plausible book. Author was winging it all the way through. Probably wrote it in under a week's time. Lacks proper research and logistics in the storytelling. save your time, read something else.

I enjoyed this book very much. It helps define the meaning of a mystery/thriller, where the bad guys are in deep trouble and the good Gal is in hot pursuit. Toni Gallo has her hands full, trying to outwit those who would attempt to put life to the sword. Of course, it's not at the same intense level as "Pillars of Fire" or a few other of his classic books; however, I would certainly recommend this book for its entertainment value

Suspense. Thriller. Death-dealing virus and Christmas all in one novel. Very readable.

Scientific novel about a group of criminals who steal a vial of a deadly virus from a laboratory that could kill millions, and decide to sell it to another group, all the while during a snowstorm. There is action and suspense along the way; including guns,violence and hostage taking. okay book.

Not one of Follett's best but not a bad read either. Characters you love to hate, characters you feel sorry for, a fairly fast-paced plot. It's a quick, easy read that doesn't require too much thought.

Thieves have stolen a deadly virus from a Scottish lab, and they have to deliver it to the buyer during a blizzard. I won't give away more of the plot, but the burning question becomes, "Doesn't anyone have a cell phone?" Enjoyable snowy suspense novel to read on a hot day.

This is a fast paced thriller - perfect to read around the holiday time. Read it and you will understand.

Enjoyable but not one of my favourites by Follett. Not memorable like Pillars of the Earth.

Looking for a detective novel sans detective; a muster novel sans mystery because it's all quite clear and a suspense novel with lots of suspense? Let me recommend to you this novel by Ken Follet. There's definitely a full ,measure of suspense as a death-dealing potion hangs in the balance, one that could a destruction far surpassing the death dealt the world by the black deaths of the Middle Ages.
The novel is so engrossing I found it virtually impossible to put it down. Read to to get to sleep and all of a sudden, before your know it's three in the morning. A good read --- a fast read. I think I've found a new favourite author.

A missing canister of a deadly virus. A lab technician bleeding from the eyes. Toni Gallo, the security director of a Scottish medical research firm, knows she has problems, but she has no idea of the nightmare to come.

As a Christmas Eve blizzard whips out of the north, several people converge on a remote family house. Stanley Oxenford, the research company’s director, has everything riding on the drug he is developing to fight the virus – but he isn’t the only one: His grown children, who have come to spend Christmas, have their eyes on the money it will bring.

Toni Gallo, forced to resign from the police department in disgrace, is betting her career on keeping the drug safe; a local television reporter, determined to move up, has sniffed the story, even if he has to bend the facts to tell it; and a violent trio of thugs is on its way to steal it for a client already waiting – though what the client really has in mind is something that will shock them all.