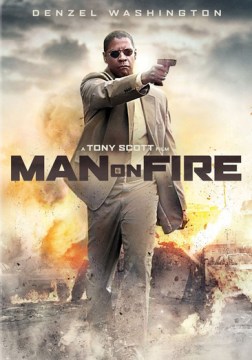 Might have been a good movie, but the copy in checked out had no audio.

A great actor!!!! and a great movie

We saw "Man on Fire" when it first came out and really liked it. We just saw Equalizer 2 the other day at a theater and loved it. We loved it so much we decided to watch the first Equalizer and then checked this move out from the library and it was wonderful. All of them great entertainment.

I thought this was a very suprising and a excellent film! Denzel never ceases to amaze with his acting abilites. I'm sure a lot of the film was based on true events, however sad that is!!
Very entertaining and worthwhile watching. I give it **** stars.

A little long, but Denzel going on a rampage makes it worth it!

while i was convinced this was a film starring a firefighter protagonist who eventually puts out the man on fire, it turned out to be a hitman and child film, with very little predatory content, to my relief.

Anytime Denzel Washington is one of the main characters in a movie, I know it will be good. The Man on Fire is action packed, sad and happy moments all packed into one show.

This movie is very entertaining. It is a well done movie with good acting and violence.

This is a 2004 American action thriller directed by Tony Scott.
This is the second adaptation of A. J. Quinnell's 1980 novel of the same name as the first film adaptation was made in 1987.
Although it appears like a docudrama, it is almost a fiction.
20th Century Fox wanted the film to be set in Italy.
An early draft of the film script was set in Naples.
Scott argued that if the setting would be Italy, then the film would have to be a period piece, since by the 2000s kidnappings became a rare occurrence in Italy.
Mexico City became the setting of the 2004 film because Mexico City had a high kidnapping rate.
As a result, the character Rika Balletto was renamed Lisa Martin Ramos, and Pinta Balletto was renamed Lupita "Pita" Ramos.
Ettore Balletto became Samuel Ramos.
Robert De Niro was originally offered the role of Creasy.
Prior to his death, Marlon Brando was the original choice to play Rayburn.
Although Denzel Washington plays the protagonist superbly, sadistic pleasure he takes in the killings is disgusting!
Apparently, the scriptwiter is to blame.
Nobody likes harming people sadistically.

Beltane thinks this title is suitable for 16 years and over

bdls206 thinks this title is suitable for 17 years and over

beckz thinks this title is suitable for

Rayburn: [refering to Creasy to Miguel Manzano in the hospital] A man can be an artist... in anything, food, whatever. It depends on how good he is at it. Creasy's art is death. He's about to paint his masterpiece.

Elderly Man: In the church, they say to forgive.
Creasy: Forgiveness is between them and God. It's my job to arrange the meeting.

In Mexico City, a former assassin swears vengeance on those who committed an unspeakable act against the family he was hired to protect.