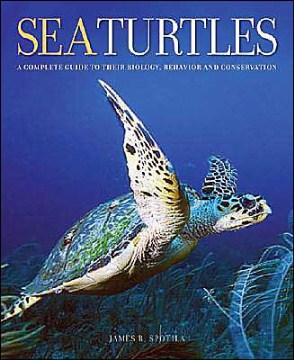 A Complete Guide to Their Biology, Behavior, and Conservation

Baker & Taylor
A richly illustrated study of the natural history and life cycle of the seven species of sea turtles offers a vivid description of each species' diets and mating habits, the environmental dangers that threaten their survival, and current conservation efforts being made on their behalf.

For more than a hundred million years, sea turtles have been swimming in the world's oceans. These magnificent, long-lived creatures spend their lives in the water, coming ashore to lay their eggs. Upon hatching, the baby turtles leave the nest and enter a dangerous world of storms and predators. The females will return to the same beach to lay their own eggs when they reach maturity a decade later. Today, there are seven species of sea turtle: the grass–eating green turtle; the sea sponge–eating hawksbill; the olive ridley; the Kemp's ridley, which is the smallest species; the loggerhead; the flatback of Australia; and the giant leatherback. Having escaped the mass extinction that wiped out the dinosaurs, these ancient reptiles today face new dangers that threaten their survival: pollution, hunting, and the destruction of their nesting grounds. Will this century be the last to witness their majesty? Will succeeding generations live in a world devoid of their graceful presence?

Marine biologist James R. Spotila has spent much of his life unraveling the mysteries of these graceful creatures and working to ensure their survival. In Sea Turtles, he offers a comprehensive and compelling account of their history and life cycle based on the most recent scientific data—and suggests what we can do now to save them. From the Kemp's ridley, which nests on a single beach on Mexico's Gulf Coast, to the nomadic leatherback, which can weigh up to a ton and is in the most imminent danger of extinction, Spotila offers a vivid description of their diets and mating habits, and the conservation efforts being made on their behalf. Illustrated with stunning color photographs by the world's leading nature photographers, Sea Turtles will inform and inspire readers of all ages everywhere.

Blackwell North Amer
James R. Spotila draws on a lifetime of experience and knowledge to offer a comprehensive and compelling account of sea turtle evolutionary history, physiology, life cycle, and behavior. In addition, he provides an insider perspective on the worldwide conservation efforts being made on behalf of sea turtles. Illustrated with images by the world's leading nature photographers, Sea Turtles opens with an informative overview of the seven species, from diet and mating habits to the female turtle's epic journey to lay her eggs on the same beach where she herself had hatched years before. Spotila then devotes individual chapters to each of the species of sea turtle.

Baker
& Taylor
Presents a vivid description of the natural history and life cycle of the seven species of sea tutles, including diets and mating habits, the environmental dangers that threaten their survival, and current conservation efforts.