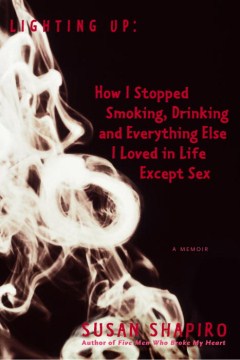 How I Stopped Smoking, Drinking, and Everything Else I Loved in Life Except Sex

Random House, Inc.
In the critically acclaimed Five Men Who Broke My Heart, Manhattan journalist Susan Shapiro revisited five self-destructive romances. In her hilarious, illuminating new memoir, Lighting Up, she rejects five self-destructive substances. This difficult quest for clean living starts with Shapiro’s shocking revelation that, at forty, her lengthiest, most emotionally satisfying relationship has been with cigarettes.

A two-pack-a-day smoker since the age of thirteen, Susan Shapiro quickly discovers that it’s impossible to be a writer, a nonsmoker, sane, and slender in the same year. The last time she tried to quit, she gained twenty-three pounds, couldn’t concentrate on work, and wanted to kill herself and her husband, Aaron, a TV comedy writer who hates her penchant for puffing away. Yet just as she’s about to choose her vice over her marriage vows, she stumbles upon a secret weapon.

Dr. Winters, “the James Bond of psychotherapy,” is a brilliant but unorthodox addiction specialist, a
former chain-smoker himself. Working his weird magic on her psyche, he unravels the roots of her twenty-seven-year compulsion, the same dangerous dependency that has haunted her doctor father, her grandfather, and a pair of eccentric aunts from opposite sides of the family, along with Freud and nearly one in four Americans. Dr. Winters teaches her how to embrace suffering, then proclaims that her months of panic, depression, insecurity, vulnerability, and wild mood swings win her the award for “the worst nicotine withdrawal in the history of the world.”

Shapiro finally does kick the habit–while losing weight and finding career and connubial bliss–only to discover that the second she’s let go of her long-term crutch, she’s already replaced it with another fixation. After banishing cigarettes, alcohol, dope, gum, and bread from her day-to-day existence, she conquers all her demons and survives deprivation overload. But relying religiously on Dr. Winters, she soon realizes that the only obsession she has left
to quit is him. . . .

Never has the battle to stem substance abuse been captured with such wit, sophisticated insight, and candor. Lighting Up is so compulsively readable, it’s addictive.

Baker & Taylor
In a whimsical memoir, the author of Five Men Who Broke My Heart, describes how she quit smoking after more than twenty years and eliminated other self-destructive habits--including alcohol, dope, gum, bread, and her psychiatrist--from her life. 27,500 first printing.

Baker
& Taylor
The author describes how she quit smoking after more than twenty years and eliminated other self-destructive habits--including alcohol, drugs, gum, bread, and her psychiatrist--from her life.