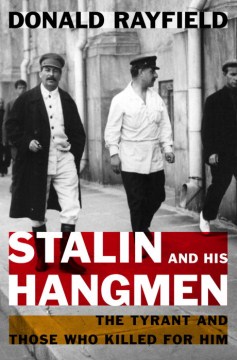 Stalin and His Hangmen

The Tyrant and Those Who Killed for Him

Random House, Inc.
Stalin did not act alone. The mass executions, the mock trials, the betrayals and purges, the jailings and secret torture that ravaged the Soviet Union during the three decades of Stalin’s dictatorship, were the result of a tight network of trusted henchmen (and women), spies, psychopaths, and thugs. At the top of this pyramid of terror sat five indispensable hangmen who presided over the various incarnations of Stalin’s secret police. Now, in his harrowing new book, Donald Rayfield probes the lives, the minds, the twisted careers, and the unpunished crimes of Stalin’s loyal assassins.

Founded by Feliks Dzierzynski, the Cheka–the Extraordinary Commission–came to life in the first years of the Russian Revolution. Spreading fear in a time of chaos, the Cheka proved a perfect instrument for Stalin’s ruthless consolidation of power. But brutal as it was, the Cheka under Dzierzynski was amateurish compared to the well-oiled killing machines that succeeded it. Genrikh Iagoda’s OGPU specialized in political assassination, propaganda, and the manipulation of foreign intellectuals. Later, the NKVD recruited a new generation of torturers. Starting in 1938, terror mastermind Lavrenti Beria brought violent repression to a new height of ingenuity and sadism.

As Rayfield shows, Stalin and his henchmen worked relentlessly to coerce and suborn leading Soviet intellectuals, artists, writers, lawyers, and scientists. Maxim Gorky, Aleksandr Fadeev, Alexei Tolstoi, Isaak Babel, and Osip Mandelstam were all caught in Stalin’s web–courted, toyed with, betrayed, and then ruthlessly destroyed. In bringing to light the careers, personalities, relationships, and “accomplishments” of Stalin’s key henchmen and their most prominent victims, Rayfield creates a chilling drama of the intersection of political fanaticism, personal vulnerability, and blind lust for power spanning half a century.

Though Beria lost his power–and his life–after Stalin’s death in 1953, the fundamental methods of the hangmen maintained their grip into the second half of the twentieth century. Indeed, Rayfield argues, the tradition of terror, far from disappearing, has emerged with renewed vitality under Vladimir Putin. Written with grace, passion, and a dazzling command of the intricacies of Soviet politics and society, Stalin and the Hangmen is a devastating indictment of the individuals and ideology that kept Stalin in power.

Baker & Taylor
A history of the Soviet Union under Stalin offers a portrait of the Soviet leader as well as the five ruthless politicos who presided over his secret police and became responsible for the deaths of twenty million Soviet citizens.

Baker
& Taylor
A landmark history of the Soviet Union under Stalin offers a vivid portrait of the Soviet leader and his trusted henchmen, capturing the lives and careers of the five ruthless politicos who presided over the diverse incarnations of Stalin's secret police and became responsible for the deaths of twenty million Soviet citizens. 16,500 first printing.