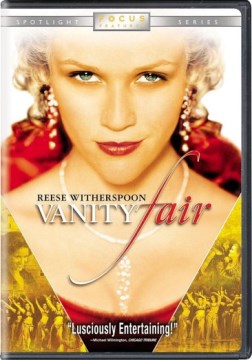 Becky is determined to make something of herself. She accepts a job as a nanny for the children of Sir Pitt Crawley. Becky catches the eye of Crawley's son Rawdon. Becky is introduced to London's most exclusive social circle, where she becomes re-acquainted with Amelia. Becky weds Rawdon, but the social and economic stability she dreamed of begins to collapse when he begins drowning his troubles, and soon she turns to the powerful Marquess of Steyne for support. Meanwhile, Amelia's fortunes fall even harder following the death of her husband.
Publisher: Universal City, CA : Universal, [2005]
Edition: Widescreen ed
ISBN: 9781417003594
1417003596

A TV miniseries of Vanity Fair came out only last year, so comparisons are inevitable. This 2004 film is certainly inferior, suffering from a lower budget, a shorter length and its director’s odd slant on the original novel. With regard to the budget, the memorable battle scenes of the miniseries, which embellished somewhat on the novel, don’t exist in the film. When the setting is supposed to be Belgium or Germany, there is really no sense we are in a Belgian or German town. All the European scenes were shot in England, and there seems have been no use or minimal use of CGI. The evening visit to Vauxhall Gardens where gold-digger Becky Sharp pulls out all the stops to get Jos Sedley to propose to her, evocatively portrayed in the mini-series, becomes a staid morning outing to a floral park in the film. With regard to the length, in reducing such a long novel to 2hr. 21 min. a lot of characters get left out: Major O’Dowd, his wife Peggy and their daughter Glorvina, George Osborne’s sister Jane, the Sedleys’ black servant Sambo (who gets replaced, as is the director’s wont, by an Indian servant named Biju), Dobbin and Amelia’s daughter Janey. All of them are to be found in the miniseries, although the politically correct miniseries changes Sambo’s name to Sam.
With regard to the director’s slant on the film, Indian director Mira Nair has played up the Indian part of the novel to a ludicrous degree. The only filming outside of England was in Jodhpur, India, where in fact the film is made to end, with Becky finally united with Jos, presumably for life, riding together on an elephant to cheering Indian crowds. In the actual novel, Becky and Jos do become a couple, but stay in Europe and it seems possible Becky murders Jos for his inheritance. At Becky’s presentation to George IV, the entertainment in which both she and her husband take place is replaced by an all-female Bollywood dance number in which Becky is the central figure, a ridiculous change that requires way too much suspension of disbelief. When Dobbin transfers to India, Nair makes him go native, dressing like an Indian would, something no conscientious British officer would do, and certainly not one who was seriously courting the hand of an Irish colleen while he was there. This may be why the O’Dowds are left out of the film altogether. While so many characters are left out, the role of Lord Steyne in the film is considerably expanded from the novel. Nair makes his path and Becky’s cross from the time she is a small girl. Steyne becomes a dedicated collector of Francis Sharpe’s art work. And in a truly silly scene Becky is moving a rug into her London flat, loses control of it, then when it unfolds on the cobblestone street she writhes provocatively on her back on the rug to show just how free-spirited she is, attracting the interest of Steyne, who happens to be passing by.
To end with the positive, Rhys Ifran as the tall but homely Dobbin in the film was surely a better choice than Johnny Flynn in the miniseries. Flynn is an excellent actor, but looks like Adonis, so was physically ill-suited to the part. Lovely Natasha Little is wonderful in the role of Lady Jane, Pitt Crawley’s wife and in the film, as in the novel, she gets to free Rawdon Crawley from debtor’s prison, a task which the miniseries inexplicably delegates to her husband. Little is so sexy, she risks upstaging beautiful Reese Witherspoon, who was quite visibly pregnant during much of the filming.

My friend and I both felt we had wasted our time by the time we got to the end of this movie. Nice costumes, though.

I adored this movie! There were twists and turns I didn't expect and it was truly an enjoyable movie

Reese Witherspoon plays her role well as a woman determined to climb her way out of being an orphan. Some of the scenes are amusing and she shows great commitment to Amelia, her friend. However, it's hard to watch her entitled husband not pull his weight, so that she's forced to turn to an abusive man for help (and she takes society's blame for it). Also interesting to see the India-born director exert her influence, including an updated ending.

A recreation of a time and place that would be hard to match. A cast that is uniformly perfectly suited to their roles. A really well written script that is directed with a masters hand. I can't praise the film enough. It was highly entertaining!

Excellent film, longish (140 minutes) and a bit slow at times.

Never able to finish the novel, lucky the DVD tells the story.

Very good, Reese Witherspoon is great in it. Beautiful Costumes and Hairdos.

First saw this movie on its big screen release, and decided to check up on it. A well crafted & sumptuous take on Thackeray's famous novel - but truly -- Reese Witherspoon takes the tall, formidably iced cake with her pitch perfect rendering of Becky Sharp. For watching on a deadly dull evening -- the colours & costumes alone will delight.

SummertimeGirl thinks this title is suitable for 14 years and over

Other: i couldn't watch this movie because the disk is creaked in half.