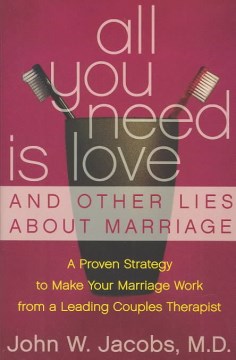 All You Need Is Love and Other Lies About Marriage

A Proven Strategy to Make your Marriage Work, From A Leading Couples Therapist

Baker & Taylor
A Manhattan psychologist and marriage therapist identifies social and historical forces that are contributing to modern marital disharmony and misconceptions, sharing essential truths about the institution of marriage while suggesting ways to develop marital skills. 25,000 first printing.

Why is it so difficult to remain married in thetwenty-first century, and what can you do about it?

We all know that half of today's marriages end in divorce, but we tend to believe that our own marriages are safe. As psychiatrist John Jacobs explains in this fresh and impassioned book, marriages today are incredibly fragile, and unless a couple understands what is making contemporary marriage so vulnerable to dissolution, the marriage is at risk.

Part of the problem is that people refuse to see how social and historical forces have changed the very meaning of marriage, causing serious interpersonal unhappiness. Because of increased longevity, married people live together longer than at any time in history. There's been an erosion of the social and cultural forces that traditionally kept marriages together. Confusion over gender-role responsibilities, increased expectations of sexual satisfaction, and intense time pressures on couples to work and be successful all create marital stress.

And yet, most people don't acknowledge the problems in their marriage until it is too late. We tend to believe in the "lies of marriage" -- such concepts as soul mates, unconditional love, that children improve a relationship, that the sexual revolution has made marital sex more pleasurable, or that egalitarian marriage offers couples easy solutions -- and forget to engage in the constant hardwork required to keep our marriages alive.

Dr. Jacobs believes that most marriages have significant problems at some time, but until we recognize the new realities of marriage and develop the skills required to sustain a loving, intimate relationship, marriages are at risk.

Of course marriage is about love. But that's just the beginning.