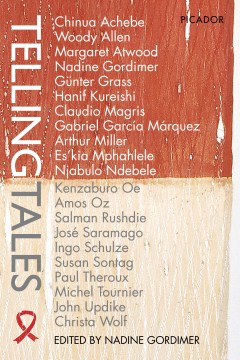 An extraordinary story collection selected by Nobel Prize winner Nadine Gordimer, from which all proceeds will be donated to the fight against AIDS

Rarely have writers of such variety and distinction appeared together in the same anthology. Their stories capture the range of emotions and situations of our human universe: tragedy, comedy, fantasy, satire, dramas of sexual love and of war in different continents and cultures. They are not about HIV / AIDS. But all twenty-one writers have given their stories--chosen by themselves as representing some of the best of their lifetime work as storytellers--without any fee or royalty. This collection includes five Nobel Prize winners: Nadine Gordimer, Gabriel Garcia Marquez, Jose Saramago, Kenzaburo Oe, and Gunter Grass; along with other world-class writers such as Arthur Miller, Salman Rushdie, Margaret Attwood, Chinua Achebe, and Susan Sontag.

Telling Tales is being published in more than twelve countries. The publisher's profits from the sales of this book will go to HIV / AIDS preventive education and for medical treatment for people living with the suffering this pandemic infection brings to our contemporary world. So when you buy this unique anthology of renowned storytellers as a gift or for your own reading pleasure, you are also making a gift to combat the plague of our new millennium.