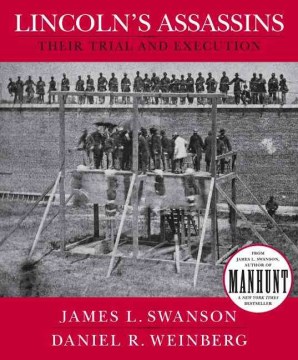 Their Trial and Execution : An Illustrated History

Baker & Taylor
An oversized, lavishly illustrated volume for history buffs traces the 1865 military trial of eight people accused of conspiring with John Wilkes Booth to assassinate President Lincoln and other high officials. By the author of Manhunt. 50,000 first printing.

Acclaimed as the definitive illustrated history of Abraham Lincoln's assassination, Lincoln's Assassins, by James L. Swanson and Daniel R. Weinberg, follows the shocking events from the tragic scene at Ford's Theatre to the trial and execution of Booth's co-conspirators. For twelve days after the president was shot, the nation waited breathlessly as manhunters tracked down John Wilkes Booth—the story that was brilliantly told in Swanson's New York Times bestseller, Manhunt. Then, during the spring and summer of 1865, a military commission tried eight people as conspirators in Booth's plot to murder Lincoln and other high officials, including the secretary of state and vice president. Few remember them today, but once the names Mary Surratt, Lewis Powell, David Herold, George Atzerodt, Edman Spangler, Samuel Arnold, Michael O'Laughlin, and Dr. Samuel Mudd were the most reviled and notorious in America.

In Lincoln's Assassins, Swanson and Weinberg resurrect these events by presenting an unprecedented visual record of almost 300 contemporary photographs, letters, documents, prints, woodcuts, newspapers, pamphlets, books, and artifacts, many hitherto unpublished. These rare materials, which took the authors decades to collect, evoke the popular culture of the time, record the origins of the Lincoln myth, take the reader into the courtroom and the cells of the accused, document the beginning of American photojournalism, and memorialize the fates of the eight conspirators.

Lincoln's Assassins is a unique work that will appeal to anyone interested in American history, Abraham Lincoln, the Civil War, law, crime, assassination, nineteenth-century photographic portraiture, and the history of American photojournalism.

The assassination is not just the story of John Wilkes Booth and Abraham Lincoln. Sure, we know dramatic details like Booth?s theatrical leap to the stage after the shooting, but this illustrated history gathers all the lesser-known but no less compelling facts of the case?Booth?s numerous schemes and failed plans before his final successful murder attempt, the extensive network of Confederate spies and sympathizers that Booth relied on, Booth?s dramatic escape and capture, and the trial and execution of the men (and woman) who aided him. The story is conveyed through detailed summaries written by two men who are assassination experts. Reproductions of newspapers articles and illustrations cover nearly every page, and the haunting faces of Booth?s accomplices stare out from their post-capture portraits. It?s a bit morbidly fascinating, but this astonishing collection of images provides one of the most accurate, intelligent, and comprehensive looks at the Lincoln assassination.