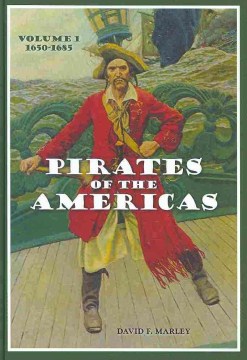 Pirates of the Americas

This book offers true stories of bloodthirsty pirates and the courageous men trying to stop them during the Western Hemisphere's golden age of piracy in the 17th and 18th centuries.

This book offers true stories of bloodthirsty pirates and the courageous men trying to stop them during the Western Hemisphere's golden age of piracy in the 17th and 18th centuries.

The real world of piracy is brought vividly to life in this authoritative and entertaining new two-volume reference. Incorporating a wealth of new research, Pirates of the Americas offers hundreds of entries on the most famous—and infamous—buccaneers of the 1600s and 1700s, separating fact from fancy as it describes the men, their exploits, and the era in which they prowled the seas of North and Central America.

Pirates of the Americas begins in the mid- to late-17th century Caribbean—the earliest cradle of piracy in the New World—with detailed coverage of Dutch and French corsairs, English rovers such as Henry Morgan, and the Spaniards who fought against them all. The second volume marks the retreat of piracy into new hunting grounds—the Pacific and Red Sea—from the 1690s to the early 18th century, ending with the final pursuit into extinction in North America of last-gasp renegades such as William Kidd, Bartholomew Roberts, and Blackbeard.

Book News
Full of blood-thirsty fights, attacks on fortifications, the razing of castles, and chases at sea, this two-volume reference will please anyone wishing to revel in the lawless circumstances that prevailed at sea through the late 17th and early 18th century. With many b&w illustrations and maps, the text includes accounts of freebooters, privateers, blockade runners, buccaneers, rovers, flibustiers, English conveys attacking the Spanish and Dutch, as well as entries on terms, places, and events, each volume is devoted to a separate era, from 1650-1685 in Vol. 1, with Vol. 2 continuing up to 1825. The entries are richly supplemented with quotes from primary sources and conclude with a list of references. Both volumes include a lengthy glossary, chronology, primary source texts, bibliography and index. Marley is a naval historian based in Canada. Annotation ©2010 Book News, Inc., Portland, OR (booknews.com)

Baker
& Taylor
Presents a history of piracy in the Western hemisphere during the seventeenth and eighteenth centuries, discussing the pirates and their ships and the naval operattions mounted by various European countries to stop them.