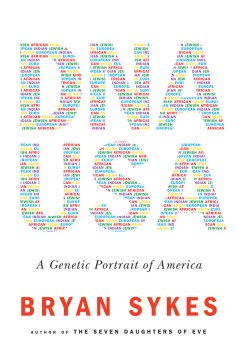 A Genetic Portrait of America

Conducts a historical genetic tour of the United States and reveals interesting facts about the ancestry of Americans and how it affects the perception of race.
Publisher: New York : Liveright Pub., c2012
Edition: 1st ed
ISBN: 9780871404121
0871404125

I am very interested in the subject, but the author meanders a lot, and the book was not cohesive.

I do not agree with the tenets of genetic determinism, which is the belief that our genes dictate almost all outcomes in our lives. I liked this book because Sykes uses
genetics to complement the (sometimes non-existent) family history of the people he interviewed. He also effectively explains some of the esoteric genetic terms that escaped
me in high school biology (x-linked recessive, etc.).

Easy to read, understand and retain.
I learned a lot.

Shenandoah thinks this title is suitable for All Ages

This book is a little less scientific than his other books (The Seven Daughter of Eve, or Adam's Curse). It focuses on America and the genealogy and genetic issure specific to the United States of America. There's a lot of boring story telling to wade through to get at the nuggets of information, but if you're interested, or have read his other books it is worth it.

Describing preparations for a road trip by car from Denver to Pine Ridge Indian reservation:

"Our imagination fired by footage of the grizzlies we would no doubt encounter on the road ahead, we decided we needed something large and solid. We were directed to that section of the lot, and there we definitely found large cars even by American standards. There was a silver monster called the Suburban -- a joke surely since it would have flattened any child it came across playing ball on the streets of the leafy outskirts that movies informed me to expect in all American suburbs. (You could have fitted the suburbs of a small American city into a Suburban and still have had room for the dog.)"