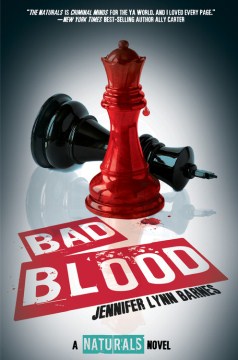 Bad Blood, the fourth book in the Naturals series, brings the story of Cassie and her friends to a close. Barnes does a masterful job of connecting all of the intricate details of all the stories into one mind-blowing ending. Cassie finally gets all of the answers to the questions that have plagued her throughout the series. Each of the characters from the series gets to use his/her specialties to help solve the case of Cassie's missing mother and a new Natural is introduced, Michael's childhood friend, Celine, who uses her talent of recognizing and drawing faces to help solve the case. I really enjoyed this final book in the series. I only wish that the book had been longer, so that more time could have been spent with the characters as they wove their way through all of the details necessary to solve the mystery. With all of the twists and turns this series produced, it is no wonder that most of this final story had to be spent tying them all together. A wonderful book and a wonderful series - too bad it has to come to an end.

The reason Cassie first joined the Naturals program is that she wanted to find out more about her mother’s murder. As Cassie, Lia, Michael, Sloane, and Dean work together to crack another case, they realize that something much bigger is going on.

This spine-chilling mystery book is bound to keep you on your toes. I would recommend this to anyone who loves a good thriller.

If I had to pick one word for this book, it'd be thrilling. I picked it up, and finished it the next day (who needs sleep?!) and was on the edge of my seat the entire time. As a series ender, it's perfect- building off the tension, character development, and established "truths" of the previous books. Despite the focus on Cassie's mom, the ensemble cast still shines as an ensemble (nicely, with Lia getting a bit more air time this book).

If I think about it, there's a not-quite-realistic bit at the end....but it makes for such a great twist that I forgive it. And anyway, there's a suspension of disbelief inherent in a series about teenage FBI assets that have a hyperawareness skill.

What I'm saying is- read this series. It's great from start to finish (would make a fantastic binge-read!) and balances multiple layers (of mystery, of character development, of storytelling devices) smoothly.

Bad Blood by Jennifer Lynn Barnes is about a girl named Cassandra ‘Cassie’ Hobbes. She works for the FBI in a special program, known as the Naturals Program. It is for naturally talented people, such as Cassie and her friends, Lia, Dean, Michael and Sloane. When Cassie was 12 her mother, Lorelai, was murdered, but recently Cassie found out that her mother was still alive, and had been taken by a group of people called the Masters. Throughout the story, we learn more about Cassie and her childhood, and get closer and closer to saving Lorelai.

My favourite character in Bad Blood is Cassie. She’s a seventeen year old, strong willed, intelligent, strong, female FBI agent. She sets a good example for girls, as she knows what is right and wrong, and she has the strength and power to stand up for herself and fight. I think that Cassie was very believable as a character, and I think if someone had described her to me before reading this book I would have believed she could have been a real person.

S highlight from the story I think is the end. I both love and hate the ending of the novel. I’m not going to say what happens (obviously), but I think it fits really well, as well as being a bit of a surprise.

I 100% recommend this book, as I think it has a bit of something in it for everyone - action, adventure, thrill, humor, love and so much more. It is a fantastic story, I would give it 5/5 stars.

When The Naturals, a team of teenagers with unnatural abilities, finally got their hands on a lead on a case, they find themselves in a maze of history and mystery. Cassie Hobbes, one of The Naturals, has lived five years of her life with her mother’s death haunting her. When she finds out her mother is still alive, she can’t believe it to be true. But her mother’s captors are powerful. So powerful that they’ve never been caught in their hundreds of years of operation. But that’s not stopping The Naturals. As they dig deeper and deeper into the case, even those who are close feel far away. As the team scavenges for clues and evidence, they know the clock is ticking and it’s only a matter of minutes before the next kill. As stories unfold and secrets are spilled, it’s not only Cassie who realizes that in the world they live in, anything is possible. 10/10
- @Bibliomaniac of the Teen Review Board of the Hamilton Public Library

I loved this book so much! It is just as good as the first three books. It pulls you in and you can't put it down. I find myself trying to solve the cases right along with the characters. The plot twist are so good and from left field. This book made me cry(not going to lie) then the last one because you are so involved with the kids, Judd and the agents now. The ride was wild but it ended so well. I hope we get more in the future.

Characters: 8/10
Plot: 8/10
Writing: 8/10
Solid conclusion to a wonderful series. I was a little disappointed at some of the turns at the end, but overall, it tied up the plotlines well and brought everything to a stable place for the characters.

When it comes to mysteries, I generally prefer cases were the detective is not being personally targeted. Writers usually use this technique to increase the stakes, but it more often jumps the shark. Going from individual serial killers to a cult of serial killers further ups the ante. Combine the two, and it is safe to say Bad Blood can get a little melodramatic. The series finale is naturally the most grandiose, graduating from serial killers to cults of ritualistic serial murders with clear ties to the disappearance of Cassie’s mother. However, at this point in the series I am much more invested in the characters than the plot.

sarahbru17 thinks this title is suitable for 14 years and over

Cassie Hobbes and her team of friends that work for the FBI are looking for an organized group of serial killers. This secret group has been killing people for decades. They only kill on certain dates according to a numerical code. When people from their past investigations are murdered, Cassie realizes that their team is actually the intended prey. As the Naturals work to solve this latest mystery, they find themselves in a race against time.

When Cassie joined the Naturals program, she hoped that she might find a way to solve her mother’s murder. But Lorelai Hobbes isn’t dead but rather has spent the past several years in the hands of a cult of serial killers. Now the next Fibonacci date is rapidly approaching, and soon the ritualized murders will start again. But the race against the clock is interrupted when the Naturals are called in to consult on the disappearance of Celine Delacroix, the daughter of Thatcher Townsend’s business partner. Michael is only days from his eighteenth birthday, and being free of his abusive father forever, but seems that Townsend Senior isn’t willing to let go so easily. Now the Naturals have two problems on their hands, and time is running out.