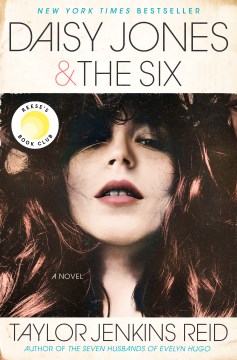 "Daisy is a girl coming of age in L.A. in the late sixties, sneaking into clubs on the Sunset Strip, sleeping with rock stars, and dreaming of singing at the Whisky a Go-Go. The sex and drugs are thrilling, but it's the rock and roll she loves most. By the time she's twenty, her voice is getting noticed, and she has the kind of heedless beauty that makes people do crazy things. Another band getting noticed is The Six, led by the brooding Billy Dunne. On the eve of their first tour, his girlfriend Camila finds out she's pregnant, and with the pressure of impending fatherhood and fame, Billy goes a little wild on the road. Daisy and Billy cross paths when a producer realizes the key to supercharged success is to put the two together. What happens next will become the stuff of legend. The making of that legend is chronicled in this riveting and unforgettable novel, written as an oral history of one of the biggest bands of the seventies. Taylor Jenkins Reid is a talented writer who takes her work to a new level with Daisy Jones & The Six, brilliantly capturing a place and time in an utterly distinctive voice"-- Provided by publisher.
Publisher: New York : Ballantine Books, [2019]
Edition: First edition
ISBN: 9781524798628
1524798622

I was engrossed in this story- sex, drugs, rock-n-roll what is there not to love? Interesting oral history style of writing, I looked forward to sitting down to read every night. Was the book ground breaking in a way that really made me think? No- which is usually my standard for giving a book a 5 star review, in most cases I would have given this a 4 star rating
BUT
The women characters had a freaking backbone, and they each had a point of view and went toe-to-toe with the men. This to me is VERY refreshing and pushed the story into the 5 star category.

This book was so fun to read. The storytelling style was very unique and easy to follow. If you are a fan of Almost Famous you will love this book!

Documentary/interview style, made the novel feel really fresh and cool. Story of a 70's rock band rise to fame. Fleetwood Mac was the inspiration. Very different, I enjoyed it!

Apparently I am not skilled enough to read a book written interview style. That said, I'd watch this as a movie or as a 'behind the music' style show because it is interesting and a quick read but I kept forgetting to read who was narrating at the time and then I lost track of the people.

Fantastic, quick read for those fans of 60s-70s rock and roll with a surprising twist. I read it so quickly because I really couldn't put it down. Have checked out two more books from this author. Big fan of her writing style.

Daisy Jones & the Six is an amazing book. It’s fiction and by the end I wanted so much for it to be about a real band and to hear the songs at the back of the book. I flew through this book and audiobook in a week and found every opportunity to listen when I could. The audiobook is fantastic with a different actor for each character within the book. They laugh, they cry, and they seem to embody each character. It’s truly the best audiobook I’ve ever listened to.

As a veteran of the music and entertainment industries, along with having researched a documentary about the icons of the industry, this story was beyond familiar and in my opinion fell short. As someone that prefers evocative, engaging stories, characters with depth, and topics properly researched, I had high hopes given the reviews. But like all art, each work is subjective, so I regret to report that this book was anything but expected. Sex. drugs and rock 'n roll, vocalists and bands struggle and eventually find salvation. We've seen and heard this story before. "... and that's all I'm gonna say about that..." ~ Forrest Gump

Picture this: It’s the mid ‘70s in Los Angeles, and the full force of flower power is starting to go a bit weedy. Rock has gone from festivals to stadiums, drugs have shifted from psychedelics to heroin and uppers, and the sexual revolution has veered past free love and into key parties. No one is quite sure yet what to make of any of it.

Into this scene stumbles a beautiful young singer, raised in an apathetic family with an artist father and a former model for a mother. No one much cares what Daisy Jones gets into, so she tries it all. Just as she begins to find her stride, a mid-western blues band hits the scene, and their label decides to pair them for marketability. It’s the birth of legendary rock band Daisy Jones and the Six.

In an amazing turn of events for your summer beach reading, this band has more drama than Fleetwood Mac (indeed, some have speculated they’re the author’s inspiration). Daisy and Six frontman Billy Dunne have instant chemistry, but Billy has a slew of addictions he’s trying to kick and a family; Daisy represents everything that could ruin his life. Keyboardist Karen is a rock goddess along the lines of the Pixies’ Kim Deal, but her secret relationship with founding guitarist Graham Dunne threatens the stability of The Six. Add in a surprise marriage to fallen Italian royalty between tours, and a production team that doubles as a therapy group for the band, and you’ve got everything you need for a dishy read so intense it’ll give you flashbacks.

Written in a fast-paced interview style, Reid’s prose and dialogue are sharp, real, immersive, and often quite funny. Highly recommended to anyone looking for a distraction, Daisy Jones and the Six offers the same gritty, ‘70s feel as the film Almost Famous. But, unlike the film, you can take this book anywhere, and you won’t want to leave it behind until you’re done. Don’t miss it.