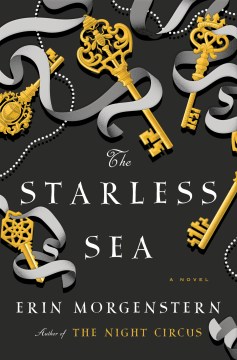 "Zachary Ezra Rawlins is a graduate student in Vermont when he discovers a rare book hidden in the stacks. As he turns the pages, entranced by tales of lovelorn prisoners, key collectors, and nameless acolytes, he reads something strange: a story from hisown childhood. Bewildered by this inexplicable book and desperate to make sense of how his own life came to be recorded, Zachary uncovers a series of clues--a bee, a key, and a sword--that lead him to a masquerade party in New York, to a secret club, andthrough a doorway to a subterranean library, hidden far below the surface of the earth. What Zachary finds in this curious place is more than just a buried home for books and their guardians--it is a place of lost cities and seas of honey, lovers who pass notes under doors and across time, and of stories whispered by the dead. Zachary learns of those who have sacrificed much to protect this realm, relinquishing their sight and their tongues to preserve this archive, and also those who are intent on its destruction. Together with Mirabel, a fierce, pink-haired protector of the place, and Dorian, a beautiful barefoot man with shifting alliances, Zachary travels the twisting tunnels, darkened stairwells, crowded ballrooms, and sweetly-soaked shores of thismagical world, discovering his purpose--in both the rare book and in his own life"-- Provided by publisher.
Publisher: New York : Doubleday, [2019]
Edition: First edition
ISBN: 9780385541213
038554121X

I figured this would be a perfect late October read. A big disappointment. This is the second book by Erin Morgenstern that I did not finish. (the first being Night Circus) Made it to page 230. Jumps around too much between stories and a little too much hocus pocus surrealism for me.

4 1/2 star read. I loved "The Night Circus" and loved this book as well, although they are very different. This was an immersion in magic, fairy tales, other worlds, stories. It was at times a bit disjointed, and time challenged, with people in one chapter in one time and the next in another time. But after a short while, it seemed to flow and not matter. I loved the stories and the magic and it is the kind of book that I would have lived in when I was younger, wishing such a world existed. I loved the characters. Zachary Ezra Rawlins was a character that I rooted for from the first meeting. This is not a book for everyone. But for those who loved books about magic and adventures in other worlds and loved stories and fairy tales, this book may just sweep you away and have you going along for the very interesting and at times challenging ride. I thought it was wonderful.

I could not put this down. If the magic of stories is something you love, then this book is for you. Imaginative writing, wonderfully descriptive language, and ... a good, old-fashioned story!

It's been a long time since I was so deeply touched by a book. I love stories and seeing how they reach people across all reaches of time and fate. This is a must-read for people who love stories- telling them and hearing them.

I loved the “Night Circus” and was looking forward to this ...but this book is totally out there and I couldn’t get into it. This happens rarely, but I couldn’t finish it...too much...

This is the worst book I have read in the past 5 years. If you have nothing better to do than to waste your time pouring through 500 page of myths, allegories, nonsensical allusions, reading and rereading pages to figure where the story is going for an ending that is not moving, or at least somewhat logical, have at it. I read the whole book, but by page 250, I got tired of where anyone was, who was alive, dead, a person who was real or the moon or some iteration, and I simply got tired of the effort. After that, it was basically endurance that got me to the end, and frankly for no value of literary consequence. The author is clearly a skillful writer, but in this instance for no literary value whatsoever.

Given the hype this book has received, the overall impression to me was a waste of time, an exercise of the author's bizarre imagination that wore thin quickly, and a dramatic letdown to the hype.

Really enjoyed this book. Night Circus was fantastic and I was sure Erin M’s second novel would not disappoint and I was right.
Give this fantasy novel a shot.

I truly don’t know how I feel about this one. My first read of 2020 and I feel like I’m stunned into a kind of awed stupor, because I can’t figure out exactly what just happened and what I just read. Going for 3 stars for the pretty, wildly vivid writing. I just...can’t seem to latch on to much else that I actually enjoyed here.

Zachary Ezra Rawlins once made the decision not to open a door, and now, a grad student studying story and video games, he stumbles across an unmarked book in his campus library. Drawn to its pages, he discovers that he is in it, that his past self is discussed in its pages. He is soon drawn into a world of mysterious doorways, rogue assassins, subterranean libraries, and seas made of substances other than water - but how? How can it be real? For a man who loves stories more than reality, he should know: everything is real because everything is a story.

This sounds so cool, and for the first 100-ish pages, even as far as 200, I was captivated. Who are these people fighting for or against the Harbor on the Starless Sea? Who is Zachary, who is Dorian, who are Mirabel and Simon and Eleanor and do they actually exist?

But then...I got frustrated.

Don’t get me wrong, this is absolutely stunning in terms of writing. Erin Morgenstern is truly a master of language. This is a love letter to reading and stories and escapism disguised as a novel. For those of us who grew up in worlds like Hogwarts and Narnia and Middle Earth, it’s perfectly logical to think that a character would stumble into one of them and never want to leave.

But I genuinely want to know how this is 500 pages when basically nothing happens. And then when it seems like something might actually be solid, grabbable, like a life raft in a sea of honey, it all just evaporates. Where is the plot? What are we reading for? Why is everything so complicated?

It’s like as readers, we’re just supposed to go along for the ride with this one, and for a while, I could. I didn’t hate this, and I know people find meaning in stories like this one because of the experiences they have reading them. But for me, the ethereal nature of the whole thing went beyond fun Alice in Wonderland frivolity to nothing making sense.

I have taken way too many English classes. I can see this becoming a classic, one of those books celebrated for its use of language and its extended metaphors and deeper meaning. I can see it, but I can’t say that I necessarily enjoyed it. I see its merits, but it’ll be one that I will say I’m glad to have read...and leave on the shelf for the foreseeable future.

I was excited to read "The Starless Sea" because I enjoyed "The Night Circus" so much. This book achieves the same great sense of place and fantastical atmosphere. It is a story on stories and the wonders they hold. There is also an underground library which is just fabulous.

"She gave me an opaque plastic cup identical to the one I'd abandoned inside but with better bourbon in it, on the rocks.

I accepted because mysterious ladies offering bourbon under the stars is very much my aesthetic."

"But he's hardly looking at the book and barely eating his noodles. He sucks at subtlety. He's watching me write. Eyeing up my journal like he's trying to figure out how he's going to snag it when I'm not looking.

You will pry this Adventure Time notebook from my cold dead hands, ya ding-dong."

"They asked if I thought he would have done something- like jumped-off-a-bridge something- and I said I didn't think so, but I also think most of us are two steps away from jumping off something most of the time and you never know if the next day is going to push you in one direction or another."

"'A book is an interpretation,' she says. 'You want a place to be like it was in the book but it's not a place in a book it's just words. The place in your imagination is where you want to go and that place is imaginary. This is real,' she places her hand on the wall in front of them. The stone is cracked near her fingers, a fissure running down the side and disappearing into a column. 'You could write endless pages but the words will never be the place.'"

"'We've been having adventures, Rhyme,' Mirabel says and the girl frowns. 'There was a daring rescue and bondage and tea and a fire and two-thirds of us got poisoned. Also, this is Zachary, Zachary this is Rhyme.'"

"A reading major, that's what he wants. No response papers, no exams, no analysis, just the reading."

"To Seeking" "To Finding"