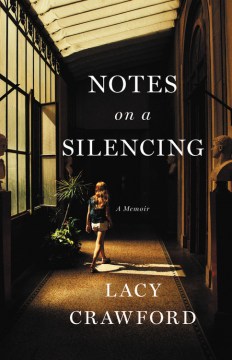 Notes on A Silencing

A &#34;powerful and scary and important and true&#34; memoir of a young woman's struggle to regain her sense of self after trauma, and the efforts by a powerful New England boarding school to silence her&;at any cost (Sally Mann, author of Hold Still).

Now with a New Afterword

When Notes on a Silencing hit bookstores in the summer of 2020, even amidst a global pandemic, it sent shockwaves through the country. Not only did this intimate investigative memoir usher in a media storm of coverage, but it also prompted the elite St. Paul's School to issue a formal apology to the author, Lacy Crawford, for its handling of her report of sexual assault by two fellow students nearly thirty years ago.

In this searing book, Crawford tells the story of coming forward during the state investigation of the elite New England prep school decades after her assault, only to find for the first time evidence that corroborated her memories. Here were depictions of the na&#239;ve, hardworking girl she&;d been, as well as astonishing proof of an institutional silencing. The slander, innuendo, and lack of adult concern that Crawford had experienced as a student hadn't been imagined; they were the actions of a school that prized its reputation above anything, even a child.
&#160;
This revelation launched Crawford on an extraordinary inquiry deep into gender, privilege, and power, and the ways shame and guilt are used to silence victims. Insightful, arresting, and beautifully written, Notes on a Silencing wrestles with an essential question for our time: what telling of a survivor's story will finally force a remedy?

&;Erudite and devastating&; Crawford's writing is astonishing&;&#160;Notes on a Silencing is a purposefully named, brutal and brilliant retort to the asinine question of 'Why now?'&; The story is crafted with the precision of a thriller, with revelations that sent me reeling&;&; &;Jessica Knoll, New York Times

Wow! Just wow! In this memoir Crawford expresses in detail about her assault as a minor by two male students who were of legal age taking advantage of her. Crawford goes on to talk about the school, who not only participate in covering up her story but also making her the victim feel like she was at fault. With the #metoo movement, sexual assault, and teaching kids about the consent this book was hard read but should be read. Great book. Thankful that the author wrote this book giving a voice to victims.